A pilot landed this airplane in Gander on Wednesday afternoon after the nose gear malfunctioned.

“An emergency landing in Gander could have gone much worse if not for the pilot’s skill, says the airport authority’s CEO.
“He walked away from the aircraft, apparently without injury, and really accomplished an astonishing feat today in what he did,” said Reg Wright.
“The way he feathered the aircraft back and cut the engine, it was a pretty remarkable landing, right in the middle of the centre line, so certainly kudos to him and his expertise. He avoided something that may have been worse.”
Feathering is a technique used to reduce drag and increase gliding distance.
The small RCMP Pilatus PC-12 plane, en route from Moncton to St. John’s, landed in Gander around 12:30 p.m., after being diverted because of poor weather.
With the nose gear malfunctioning, the pilot — who was the only one on board — first briefly touched down in the hope the bump would jar the nose gear loose.
“That didn’t happen, so he did a second and final approach on Runway 13,” said Wright. “He landed with minimal damage to the aircraft and no damage to himself, which is quite a good thing.”
The airport had been alerted about the pilot’s difficulties about an hour before the landing, so emergency responders were ready as the plane came in. 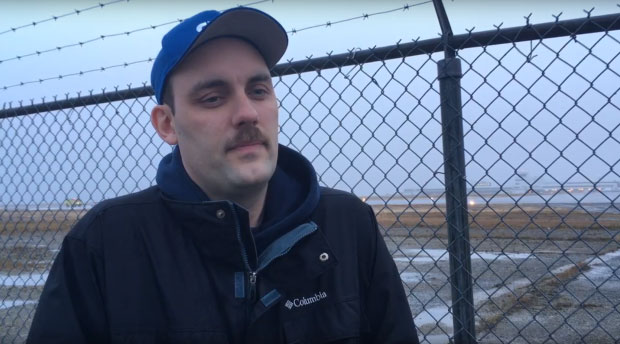 Former airport employee Wade Parsons saw the plane come in. He said he was amazed the pilot was able to land as gently as he did. (Garrett Barry/CBC)

“When I seen him come down, he landed on his mains and he kept his nosewheel up as long as he could, until he ran out of forward momentum, and then he just dropped the nose down and you can hear the scraping of the prop up against the asphalt,” he said. “It was a really good landing. It’s good that he wasn’t hurt.”
A few people had gathered to watch the plane land, said Parsons.
“Everybody was amazed he put it down so gentle. Some people were even clapping and whistling and stuff like that. It was cool. It was really, really cool.”
The Transportation Safety Board has been notified of the landing and will be investigating the malfunction, said Wright.”
A video of the landing is available here: