An early French settlement, the town of Gravelbourg in south central Saskatchewan markets itself on billboards as “A Touch of Europe on the Prairies.”

More than half of its 1,100 residents identify as francophone or bilingual.

So it was with great reluctance that, under pressure from the RCMP, town council recommended the police force recruit English-only officers who are willing to take French lessons rather than bilingual officers.

For months, the town and surrounding area has only had one police officer who can respond to calls.

Gravelbourg is one of 11 bilingual RCMP detachments in Saskatchewan, out of a total of 113 detachments.

There are five paid positions; four of which were classified by RCMP as “priority one” and had to be filled by bilingual police officers. The other could be staffed by an English-only officer.

In recent months, three bilingual positions have been vacant and the sole bilingual officer is pregnant and restricted to desk duty. Only the anglophone officer can respond to calls in an area that spans 100 kilometres north-south, and at least 60 kilometres east-west. At times, the RCMP sends backfill from the city.

Still, Lamarre said it’s not safe for the officers or the public.

In early September, council invited RCMP Insp. Ted Munro to a private meeting to discuss security concerns related to a lack of officers.

According to the mayor and two councillors, Munro told elected officials that the police force is struggling with staffing shortages across Canada and that filling the bilingual positions was unlikely.

The overall job vacancy rate nationwide at the RCMP is 6.6 per cent. 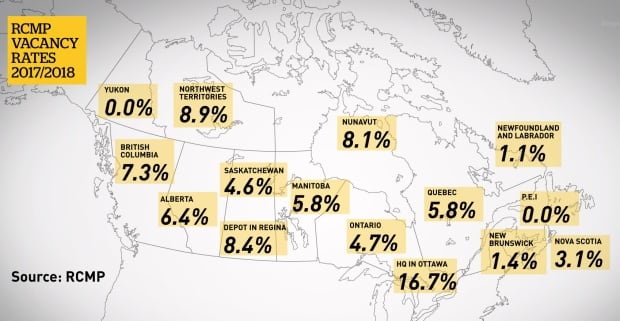 To deal with recruitment issues, Munro revealed that the RCMP had already downgraded two constable positions from priority one (an officer who must speak English and French) to priority two (an English-only officer who must take French lessons and become bilingual within two years). He then encouraged council to write a letter to the RCMP recommending that it downgrade all four bilingual positions to priority two.

As a federal institution, the RCMP is required to offer services in both French and English in the Gravelbourg area, where more than five per cent of the population is francophone, according to the Official Languages Act and regulations. However, it’s up to the RCMP to decide how it can provide that service to residents at all times.

On Sept. 18, town council sent the RCMP a letter recommending that it reclassify the remaining two bilingual positions — a constable and sergeant — to priority two as well. It suggested police officers could start taking “beginner French” classes in November.

Lamarre said the RCMP made it clear that the town should either accept anglophone officers or wait much longer for bilingual officers.

“It’s not a decision that we took lightly because we are known as a bilingual community,” the mayor said. “[The RCMP] have been short staffed for quite some time. The RCMP had nobody that could fill the bilingual positions, and we felt it was important for the safety of the community and the surrounding community that we get our members back up to full force.”

The RCMP said it won’t downgrade all four positions. It has recruited one anglophone officer who will move to Gravelbourg this month, and expects to place another in the community very soon.

The Office of the Commissioner of Official Languages in Ottawa confirms that it is already investigating two official complaints on the matter.

And while most francophone residents in Gravelbourg can speak English, many are afraid to lose ground in their fight to protect minority language rights.

Former alderman Michel Vézina resigned from council because he couldn’t support its decision to endorse downgrading bilingual positions. He scoffed at the idea that an Anglophone officer could become fluent in French by taking lessons for two years on top of policing duties.

“For matter of principle, I decided to resign,” Vézina told CBC News. “I will be better able to defend [language rights] outside of council, since they don’t want to defend that.”

Vezina, who is part of Gravelbourg’s francophone association, has filed a personal complaint to the official languages commissioner in Ottawa.

Another complaint from l’Association communautaire fransaskoise de Gravelbourg was filed by the group’s president, Maria Lepage.

“It is a breach of our rights,” Lepage told Radio-Canada.

“We know that there are bilingual officers who are sent to unilingual anglophone regions,” Lepage said. “It is a matter of organizing and responding to the need for what it is.”

With files from Radio-Canada