The judge in a lawsuit against the RCMP has called the national police force’s treatment of plaintiff Sgt. Peter Merrifield “outrageous” and has chastised the force for its lack of credibility and forthrightness in defending the case.

“The defendants had a reckless disregard of causing the plaintiff to suffer emotional distress,” wrote Judge Mary Vallee in her 176-page ruling.

She awarded Merrifield $41,000 in lost wages for delayed advancement, and $100,000 in general damages for “harassment and intentional infliction of mental suffering.”

The lawsuit accused the RCMP of harassment and bullying. The case was heard in Newmarket, Ont.

Vallee criticized the RCMP for its failure to comply with disclosure requirements, found the reasons given for the late production of officer’s notes “dubious,” and questioned the credibility of some of the senior officers’ testimony.

Merrifield, 50, says now he can finally relax. He is currently assigned to VIP protection in Toronto and is one of the executive co-chairs behind the National Police Federation that is attempting to unionize the Mounties.

“This is the first deep breath I’ve taken in 12 years,” the officer said Tuesday. “It feels good.”

A spokesperson for the RCMP said by email Wednesday that the force had “received the decision of the court yesterday and are in the process of reviewing it.”

Merrifield was doing town halls for the labour organization in Alberta when he found out about the ruling.

Merrifield began the civil lawsuit because he claimed he felt harassed and bullied by his RCMP superiors after running for the Conservative party nomination in Barrie in 2005.

At the time, his superiors became upset with him for supporting the Conservative Party planks: the traditional interpretation of marriage, advocating the abolishment of the gun registry and calling the Liberal government corrupt. 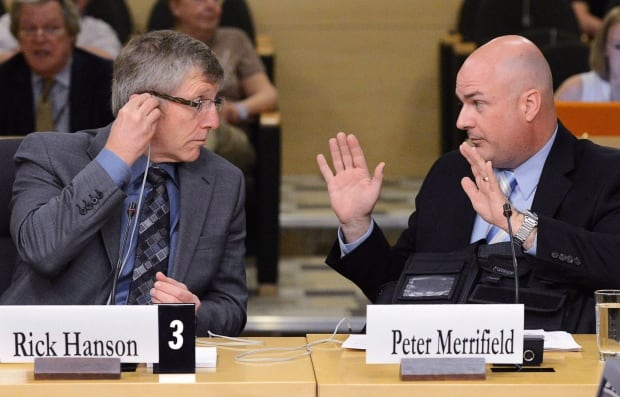 Peter Merrifield, right, president of the Mounted Police Association of Ontario, and Rick Hanson, then chief of the Calgary Police Service, appear at Senate national security committee to discuss harassment in the RCMP on May 27, 2013. (Sean Kilpatrick/Canadian Press)

During his harassment, Merrifield continued to stand out, receiving positive performance reviews, the judge said.

He laid charges in a case involving threats against then prime minister Paul Martin and U.S. president George Bush, completed a large-scale cross-border gun-smuggling investigation, and stopped a man from shipping devices to Iran to aid in uranium enrichment, obtaining the first conviction under the United Nations act dealing with nuclear counter-proliferation.

But the strain of constantly being investigated got to him, Vallee’s ruling said. He had bouts of depression, spending long periods on his couch, disengaged from his family, finally ending up on an operating table for stress-related heart issues.

The worst of it, he said Tuesday, was “the psychological.”

“To be a member of an organization that is about truth and justice, and to be dealing with a lack of truth, and an injustice in the organization, at the highest levels, and to have my integrity attacked — the sense of betrayal you can’t put into words,” said the Toronto-born officer.

He reached out to senior levels of the RCMP, including multiple commissioners, but his plight was ignored.

“They refused to look at them,” he added, “and instead spent millions of taxpayers’ dollars defending the behaviour of a few officers.”

After years of trying to get documentation for his lawsuit, and having his Access to Information requests ignored or frustrated, Merrifield’s civil suit finally reached court in November, 2014.

The 12 weeks of testimony, drawn out over 13 months, were marked by testimony from RCMP Commissioner Bob Paulson that conflicted with evidence from his senior staff concerning whether Paulson had been briefed on a case that partly involved Merrifield. The commissioner denied that he’d been told about it.

As well, one of Merrifield’s accusers tearfully admitted to the judge his own indiscretion of soliciting a prostitute who turned out to be an undercover cop, a mystery informant who told court that other RCMP members badmouthed Merrifield and discouraged the informant from working with him.

Merrifield’s lawyer, John Phillips, said Tuesday it was clear from the judge’s decision that she was disturbed “that the national police force, in a civil action, even with a designated file manager, couldn’t comply with their obligations to disclose [documents] to allow for a proper trial.”

Phillips himself was flabbergasted that RCMP’s counsel in the case “took such a hard line on the credibility of Merrifield,” in contrast to all the performance reviews that cited his integrity.

In her ruling, Judge Vallee borrowed from one of his performance reviews, stating that Merrifield had an “encyclopedic knowledge of the evidence” and was entirely credible at the hearing.

“On a case, which, at the end of the day, is worth $141,000,” said Phillips, “this is the way the RCMP has decided to deal with someone who made a complaint? That’s a real problem. With the RCMP female class action about to be settled, this whole culture of harassment in the force is not just in relation to women, but goes to an abuse of authority in general.”

Pass on his lessons

Having held town halls for members of the force in Fort McMurray and Cold Lake, and going next to Battleford and Swift Current, Sask., Merrifield promised to pass on what he learned to the rank and file through the association he helped found.

“No member deserves to be treated the way I was treated,” said Merrifield.

One of the key protections the National Police Federation can give to its members, he said, “is a balance of power and accountability.

“We intend to fix the force from the ground up,” he added. “With my experience I want to protect and defend other members.