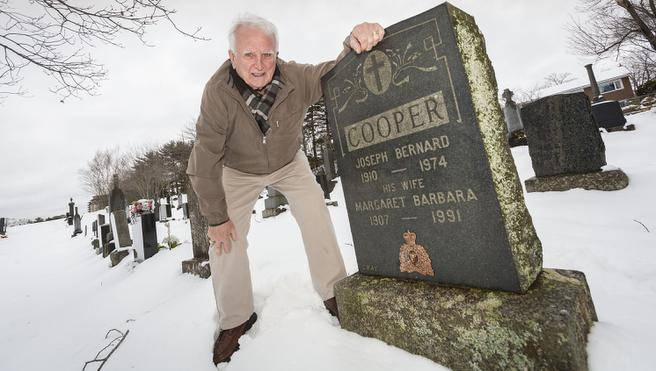 For years, Tom Lowe and a team of active and retired RCMP officers have been scouring the obituaries and cemeteries of Nova Scotia looking for lost members.
“I’d go to funerals and make contact with some family member,” Lowe says.
“I’d watch and see who’s being introduced around and try to find a son or daughter of the member who’d passed away. I’d give them my card and say, ‘When you get to the point where you’re trying to select a grave marker, get in touch. You’re entitled to a certain one, free of charge.’ A lot of them just didn’t know.”
It’s all part of the RCMP Graves Recovery Project to log the locations of every RCMP grave in Nova Scotia to ensure they are checked and maintained once a year, and that every eligible member has his or her grave marked with an RCMP emblem.
They know of about 350 graves that are checked each year. Lowe’s team has found more than 300 other graves in the province, and believes many more remain unfound.
They have funding, but not endless. Each headstone could cost $2,500, so suddenly providing dozens would break the budget.

Heritage Memorials came up with a less expensive regimental headstone, which they will install for $200.
That means their $5,000 a year budget over three years will go much further.
“We want to know every site. We want everyone who was ever a member, from one day to 40 years — it doesn’t matter,” he says. “If (readers) have had a relative in the RCMP who has passed away and is buried somewhere in Nova Scotia, let us know.”
In addition to finding and caring for graves, he’s also ensuring that members who served 20 years, or who died on the job, get either a free military-style headstone, or a crest added to their existing headstone honouring their service.
He recently added such a crest to the Camp Hill Cemetery grave of Henry Neil Oldham, born in 1846 and died in 1921.
“He was with the group that was first hired in 1873 to form the Northwest Mounted Police and travel out west on horseback,” he says. “I find it tremendously interesting.”
He has also solved the mystery around John F Kelly. He knew Kelly had served with the RCMP, but little else.

Lowe issued a public call for help a few years ago.
“We got a call from his granddaughter. We found out there were two granddaughters still alive and a few other relatives,” Lowe recalls.
With their help, he found the gravesite — it was just a piece of yellow stone with Kelly’s name on it. “Nothing else. No dates, no nothing,” Lowe says. “He was taken (into the RCMP) on April 1, 1932 and he died in January 1933. I said, now there’s got to be something behind that.”
Kelly’s descendants were “thunderstruck” at the emerging history. Lowe investigated and found that Kelly signed up just as the RCMP took over provincial policing in much of Canada. He noticed some of the information he got about Kelly was marked “DWS.” He learned that meant Died While Serving and that Kelly died of tuberculosis at about 32 years old, after only eight months on the job.
That meant Lowe was able to get him a proper tombstone at no cost to the family.
“I still get calls and emails from the grand-daughters. They go down and check it out and send me a little email saying everything is fine,” Lowe says. The RCMP have added Kelly to their list of annual checks, meaning his final resting place will be maintained at government expense.
Another recent find came with a familiar last name: John Tremaine, a relative of former CBC host Don Tremaine. John died in 1972 and had no headstone in Camp Hill.
Working with Don Tremaine, Lowe got a marker added to his grave.
It’s not limited to long-lost members. One of the RCMP members who helped Lowe find the missing graves died unexpectedly.
It turned out his wife knew nothing of his backwoods mission.
“It was amazing — his wife did not know that he was entitled to a grave marker at no cost,” Lowe says. “He just inspected the graves and did his thing, and never told anybody.”
Lowe ensured he got his deserved marker. And yes — Lowe has already added his own name to the list for when the time comes.